Increased Risk Of Bone With Proton Pump Inhibitors: An Update

Proton Pump Inhibitors (PPIs) are a group of drugs whose main action is to produce a pronounced and long-lasting reduction of gastric acid secretion, which makes them useful in a series of pathological conditions such as heartburn, peptic and duodenal ulcers, gastroesophageal reflux disease (GERD) and Zollinger-Ellison syndrome, among others.
Although PPIs have proven to have a very favorable safety profile, the increasing number of patients who take them for chronic conditions, such as GERD, has focused the attention of the authorities on their long-term potential adverse effects.

In May 2010, Food and Drug Administration (FDA) released the following safety announcement: “Possible Increased Risk of Bone Fractures with Certain Antacid Drugs”. (1) In this publication, FDA warns: “There is a possible increased risk of fractures of the hip, wrist, and spine if you take certain drugs for heartburn, acid reflux, or ulcers. The drugs belong to a class of medications called proton pump inhibitors (PPIs), which work by reducing the amount of acid in the stomach”. (1)

FDA announcement was based on a systematic review of seven published studies, six of which reported an increased risk of fractures of the hip, wrist, and spine with the use of PPIs. (2-7)

The research on this topic did not stop with this announcement. In June 2011, one year after FDA review, a new meta-analysis of 11 studies was published in the American Journal of Medicine. In this study, an overall odds ratio [a] of 1.30, for all fracture types combined in subjects taking PPIs, was identified. (8)

In June 2014, FDA report was presented as part of the agenda in the public workshop, “Advancing the Development of Pediatric Therapeutics: Pediatric Bone Health”. (9)

As a result of FDA announcement, the labels for both the prescription and the over-the-counter PPIs were revised to include new safety information:

“Several published observational studies suggest that proton pump inhibitor (PPI) therapy may be associated with an increased risk for osteoporosis-related fractures of the hip, wrist, or spine. The risk of fracture was increased in patients who received high-dose, defined as multiple daily doses, and long-term PPI therapy (a year or longer).” (10)

“Patients should use the lowest dose and shortest duration of PPI therapy appropriate to the condition being treated. Patients at risk for osteoporosis-related fractures should be managed according to established treatment guidelines.” (10)

More recently, in 2016, a new meta-analysis was published in Osteoporosis international under the title: “Proton-pump inhibitors and risk of fractures: an update meta-analysis”. (11) This time the revision included eighteen studies involving a total of 244,109 fracture cases. Again, the results of this study showed that PPI use was associated with a moderately increased risk of hip, spine, and any-site fracture. Rather than just reporting a similar finding as the previous meta-analysis, with the benefit of additional data, this meta-analysis would provide high statistical power to confirm this moderate, but consistently observed association with fracture risk.

Although the relationship between PPIs and fracture risk was classified as “moderate”, even a slight increase in ratio due to PPIs may lead to a large number of additional fractures on a public health scale, since PPIs are the third-highest prescription drug seller in the United States, with more than 7 billion doses sold in 2015, according to IMS.

The biological mechanism through which PPIs may increase the risk of fracture is still unknown. However, the strongest hypothesis points out to the relationship between the gastric pH, and the solubility of calcium salts. An acidic environment in the stomach facilitates the release of ionized calcium from insoluble salts, which is thought to be necessary for calcium absorption. PPIs increase gastric pH, which may decrease calcium solubility, as well as its subsequent absorption. (12)

[a] An odds ratio (OR) is a measure of association between an exposure and an outcome. The OR represents the odds that an outcome will occur given a particular exposure, compared to the odds of the outcome occurring in the absence of that exposure. 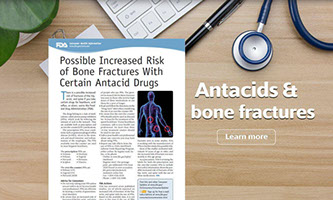